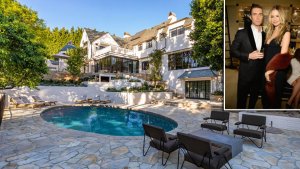 Kudos are in order for Adam Levine, the frontman of the Maroon 5, who is fast becoming a real estate maven of Los Angeles.

According to Redfin, who posted the sale on Thursday, the “Girls Like You” singer (a CA Real Estate Flipper) sold his lavish seven-bedroom Beverly Hills, California, $45 million mansion in less than five weeks. In a super-luxury market plagued by price cuts and long list times, the final deal was just a few million off his $47.5 million asking price.

In March 2018, the singer purchased this particular Beverly Hills residence for $34 million and flipped it for $11 million more in just over a year.

He spent a lot of cash updating the place, of course. He renovated the interiors and grounds and added new amenities that put the superstar back about $8 million in total.

In the traditional American vernacular style of the time, the swanky home was built in 1933. It now spans over 10,000 square feet, with seven bedrooms, eight bathrooms and a myriad of bonus rooms — including a home theater and media room, a gym, two kitchens, and a guest house.