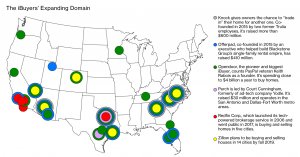 House Flipper Zillow Lost $109K Per Flip – Observe the golden rule…you don’t want to spend more than 70% of the after repaired value (ARV) minus the cost of repairs. It costs money to buy homes, get them ready to flip, market them, finance them until they’re sold, and deal with the transactions. House Flipper Zillow’s goal of a 1.5% profit margin on every house just ain’t working.

So let’s see how Zillow’s new thingy did in the quarter ended March 31 as reported by Wolf Street:

But it costs money to buy homes, get them ready to flip, market them, finance them until they’re sold, and deal with the transactions, in a corporate manner. So Zillow booked the following expenses associated with its home flipping operations:

So, revenues of $128.5 million from selling the homes, minus $173.7 million in costs and expenses associated with these home sales, for a loss on its home flipping operations of $45.2 million.

So this is a horrendous business.

Steve Eisman, a well-known investor who’s known for famously betting ahead of the foreclosure crisis against subprime mortgage bonds, informed Bloomberg Radio in August that he had chosen to short Zillow’s stocks. Flipping distressed households in a healthy economy is decent business, he said, but at best..it is still small business.

Making fair market offers, as designed by Zillow, is exponentially more risky than traditional home flipping (purchasing at 70% or less of fair market value), as sellers will only pull the trigger if they understand they’re getting a good deal. “Why a non-stressed seller would sell their house” questioned Eisman to Zillow. “For that, there are only two options. Either, one, Zillow has mispriced the house,” he said. “Or there’s something wrong with the house.”