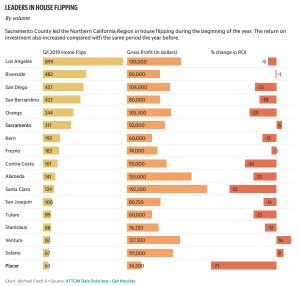 California Leaders in House Flipping – Sacramento County takes the lead in the Northern California Region and is one of the few counties where ROI has increased. FYI, LA County had 899 homes flipped in Q1 2019 with a 9% drop in ROI.

House flipping surged in Sacramento. Does that mean real estate is now a good investment?

There are few places better for house flippers in Northern California than Sacramento County.

New data shows Sacramento leads the region in the number of homes flipped and was one of the few counties where the return on investment increased compared with the same period the year before, according to ATTOM Data Solutions.

In the Sacramento region, flipping activity – and profits – still pale in comparison to the heady days before the Great Recession. At the peak of activity in 2005, there three times more flips in a quarter than the most recent three-month period.

Flips accounted for 7 percent of sales, a slightly larger share than the 6.9 percent of flipping sales volume for the entire state.

The activity is another symptom of a housing market where consumers are eager to buy, said Jennifer von Pohlmann with ATTOM Data Solutions. The average number of days to flip a property declined in the Sacramento region by 10 percent, data shows.

“We’re noticing flippers relieving some of their inventory because interest rates have dropped,” she said. What’s more, von Pohlmann said more investors are choosing to finance the purchase of their properties before flipping them.

A little more than 17 percent of the homes sold in the Sacramento region were to cash buyers and 14 percent were sold to buyers with loans backed by the Federal Housing Administration.